skip to main | skip to sidebar

DataPower get WSDL from MPGW - make it work with ?wsdl

I needed to make the GET method work with POST on MPGW (Multiple Protocol Gateway). I made a proxy service which does some WTX COBOL <==> XML mapping ( on that I will expand in another post) over WMQ. The proxy exposed over SOAP.
I wanted to enable the service consumers an option to get the WSDL from the DP on the same URL with the "?wsdl" method. Customer doesn't have WSRR or other registry solution on site.
On the way I encountered on a strange issue in DP when tried to make the GET and POST methods enabled at the same time on the MPG. It just didn't worked at the same time. POST or GET not together.
No error at all, after some investigation of the probe log I noticed the following information message :


The issue was that by default the policy rule can handle only one method at a time like GET or POST and not together. IBM likes to hide stuff.


To handle this issue you need to enable non xml processing on the processing rule under the Objects --> Xml Processing --> Processing Rule --> [Your Rule], set the "Non-XML Processing" to on. This will solve the parallel processing of SOAP (POST) and HTML (GET) in the same policy. 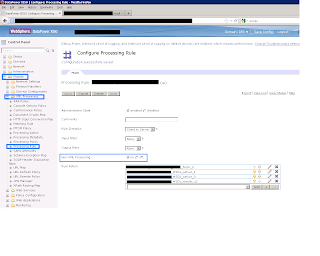 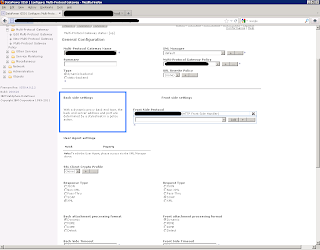 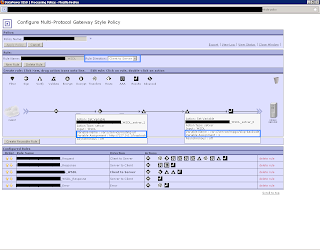 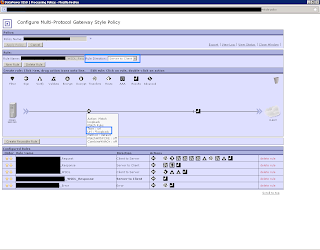 That's it.
Hope it would help someone.

I think that in the last two years there was a lot of online BUZZ regarding the Biztalk Server will go out of support.
I believe that this won't happen in the nearest time.
Microsoft can't kill its middleware Integration solution. There are thousands of production Biztalk environments world wide.
Biztalk will stay as a on premise server solution for some time, yes Microsoft roadmap is to move toward the  cloud solution. AppFabric with Service Bus, Integration Services, Cache Service and other services will eventually implement the current Biztalk capabilities, the solution won't be called Biztalk.
Microsoft aims to create a single middleware solution for cloud and On-Premises projects.
Today Microsoft focus is on the cloud. And it will take time , years, to implement Biztalk functionality on the AppFabric cloud solution.
Migration probably won't be smooth but eventually it will work, from what I saw online the migration process won't be able to handle whole applications, only artifacts (Orchestrations, maps, pipelines and ...).
But I am sure that Microsoft will provide the needed support in a reasonable TCO to move from Biztalk Server to the AppFabric next-Generation middleware solution.

Microsoft will continue to the develop and invest in Biztalk Server project till the cloud AppFabric project will have the needed and current Biztalk capabilities.
The Biztalk project will be evolved in a moderate speed and investment.

Biztalk will stay in the market for a long time, eventually Biztalk capabilities will be implemented on the Azure AppFabric solution.
Posted by Alex Linder 2 comments
Labels: AppFabric, Azure, Biztalk, Biztalk out of support, close, kill
Older Posts Home
Subscribe to: Posts (Atom)